Last weekend I had the chance to pop over to Tokyo for work. Pshhh, work consisted of 4.5 days in Tokyo, with only two spent at a conference. The conference itself was fairly interesting. I got to wear my suit again, which I literally NEVER wear, and I caught up with some JETs who left Vancouver with me way back 1.5 years ago. There were some motivational speakers and it left me feeling rejuvinated. I am headed back to Canada in 6 months, but I have gained valuable skills here. I am looking forward to seeing how I can use it to get a great job in the ESL market back home.

Anyways. TOKYO!! This weekend happened to fall right before Valentine's day and the 11 month anniversary of D and I, so it was a fun one:)
First things first we stayed with AirBnB, at an apartment in Roppongi Hills. The area was convenient and nice, but the flat was disgusting!! It didn't have a window, was super dirty and still cost us $130 each. I was so unimpressed. I know it is hit and miss, but this place was a huge miss. Aside from that the location was great. We spent the Saturday night at a mexican joint for a friends birthday. It was so-so as far as Mexican, but since Tottori has nothing to be had in that area I will take it! Following dinner D and I ended up at a bar called Medusa, outside Shinjuku station. It was amazing. Open every night until 4am it is atrociously expensive and is home to vaulted ceilings, giant glass chandeliers and three resident sharks. It was a smoky, expensive atmosphere, with some bottles on the menu going for well over $10,000! Probably also a place where Yakuza frequent, but who can pass up sharks?! 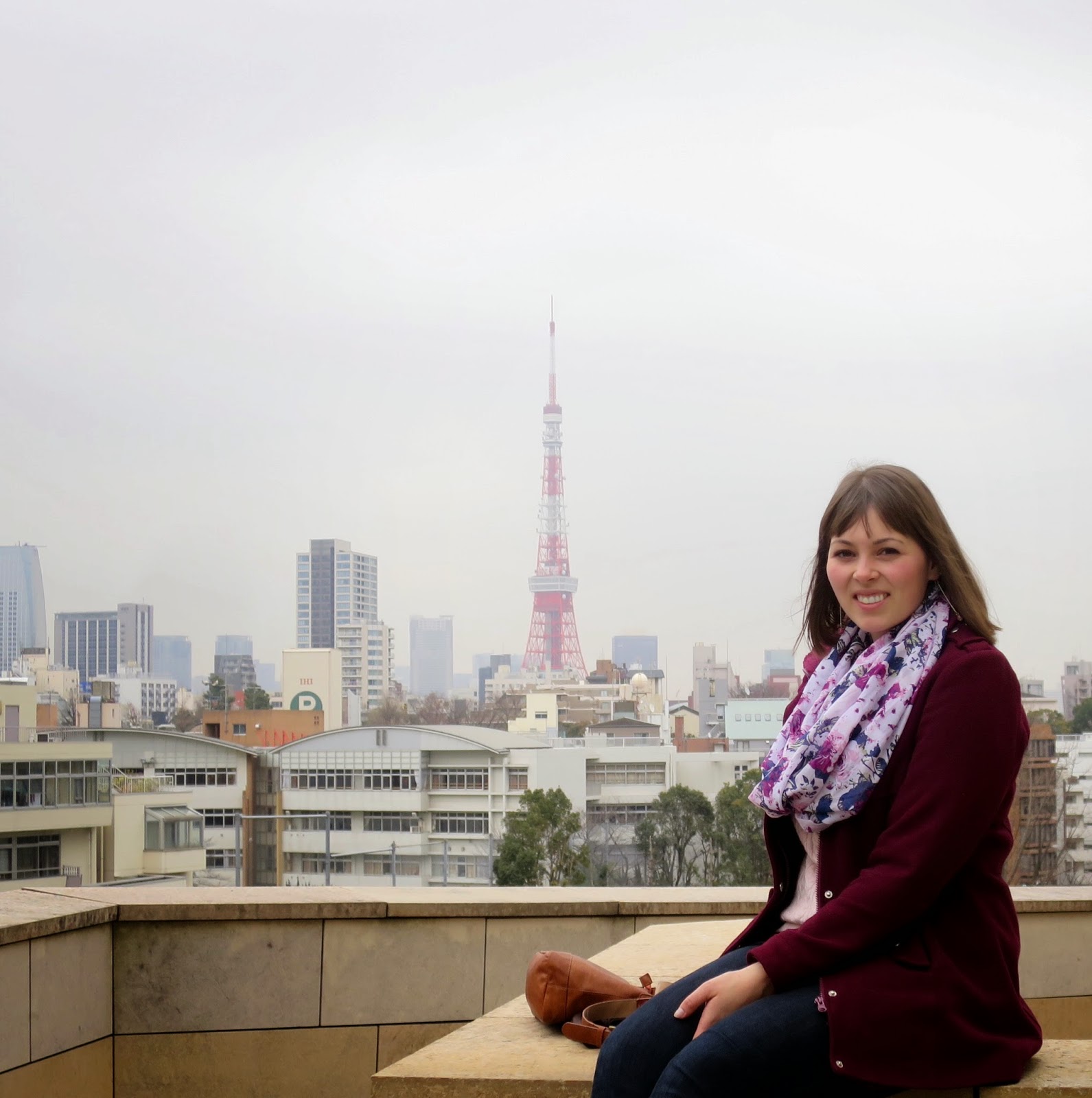 The next day Dan planned a whole special time for us. To start we headed past Roppongi Hills to a great lookout of the city, and of Tokyo Tower!!! Next D took us to a little restaurant called Ft. Lauderdale. The breaky menu was exquisite and included refillable coffee(unheard of in Japan!) 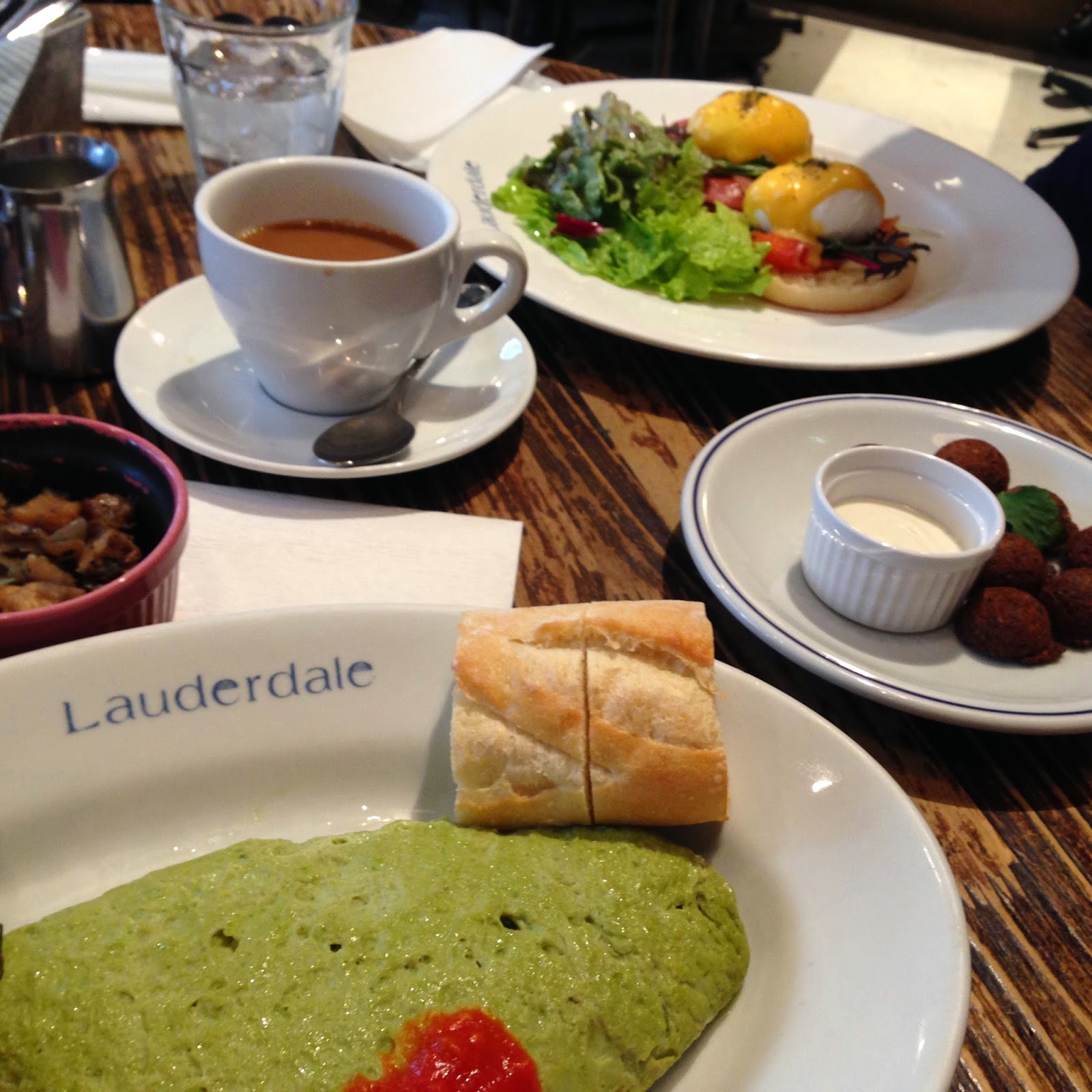 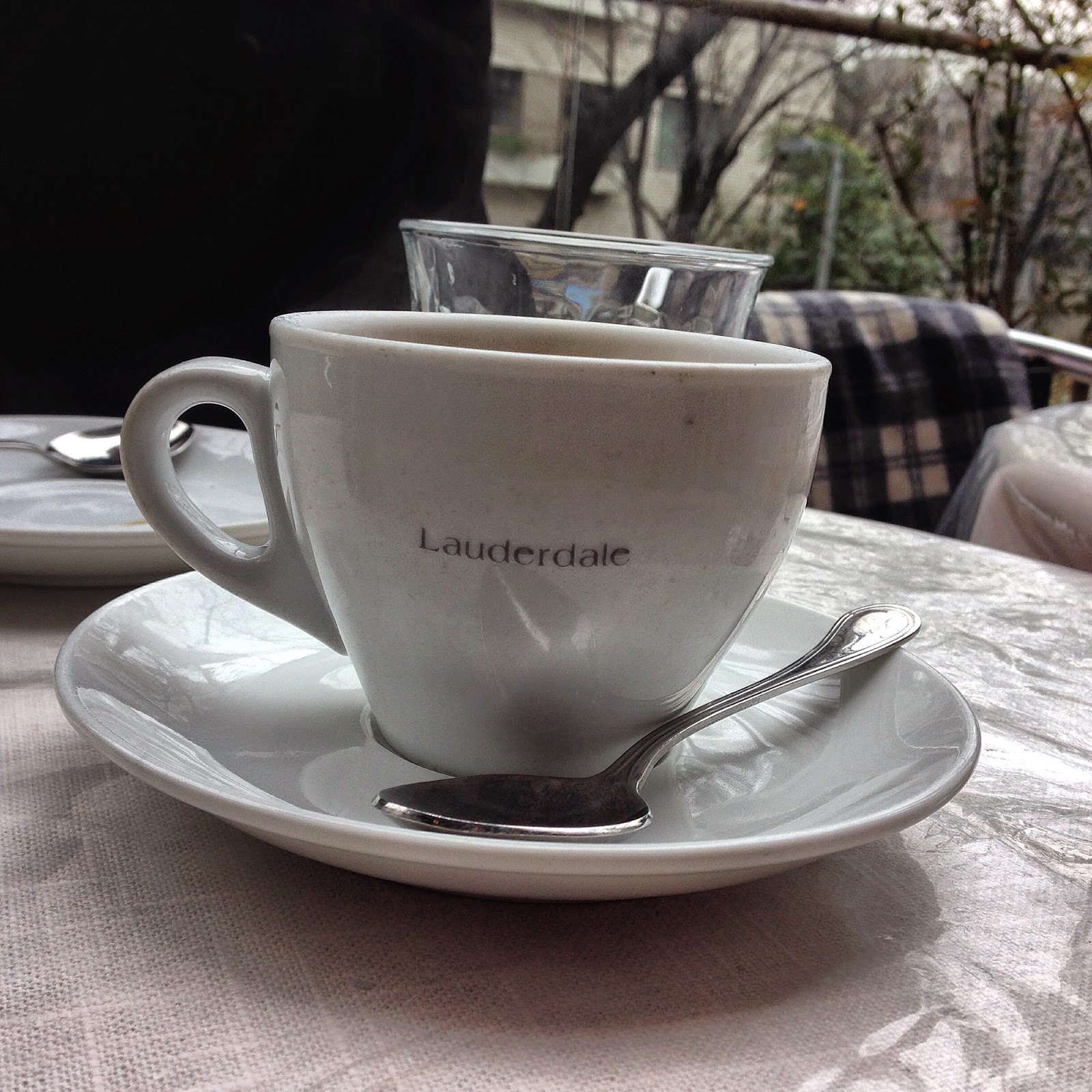 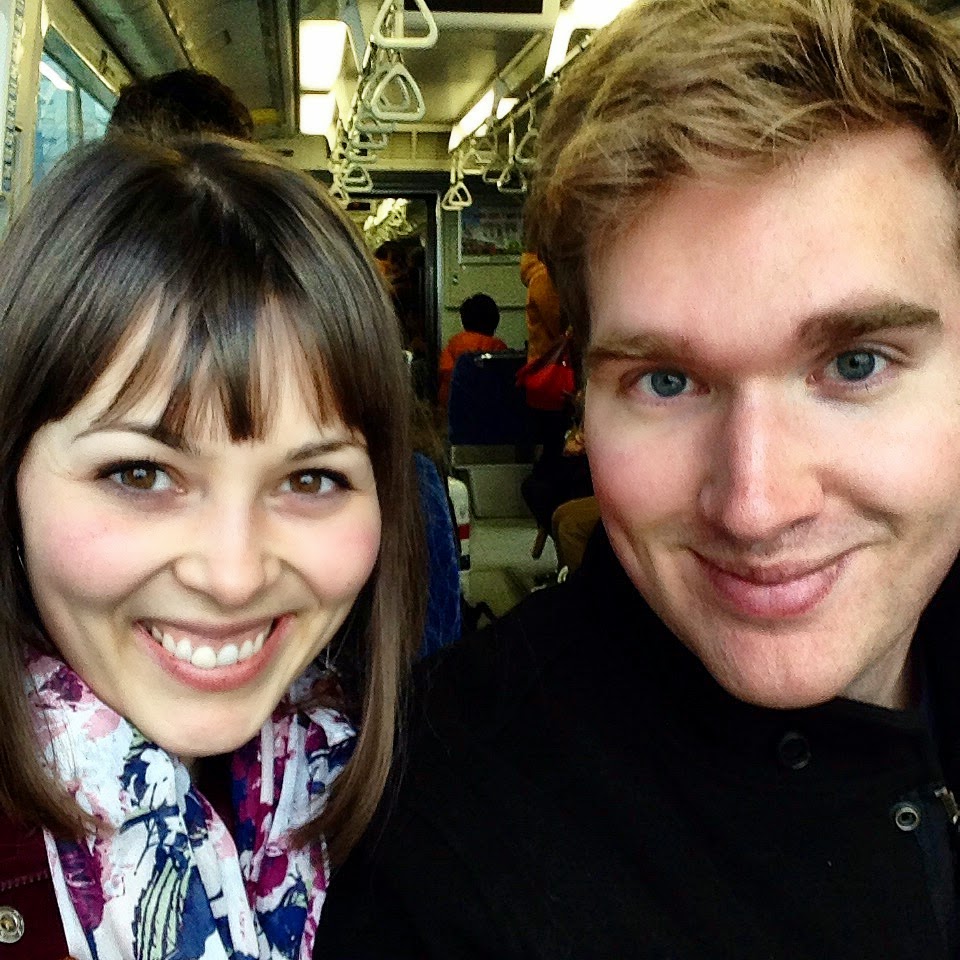 From there we headed to Odaiba island. This island has a ton of fun stuff to do and see, and is also a great spot to catch one of the boat cruises that can take you to different spots of Tokyo. We wandered in one of the malls, but skipped walking outside due to the heavy rain. I managed to catch a picture of the statue of liberty tho! It is a great photo op on a brighter day :)
Our boat didn't leave until about 2:30, so we stopped for Hawaiian lunch first!! It was amazing :)

The boat tour was so relaxing, and by the time we got off at Akusakusa an hour later the rain had mostly cleared off and the hazy mist was burning off. We spotted a Tullys and grabbed some coffee and enjoyed the view of Tokyo Tower. It was so romantic! 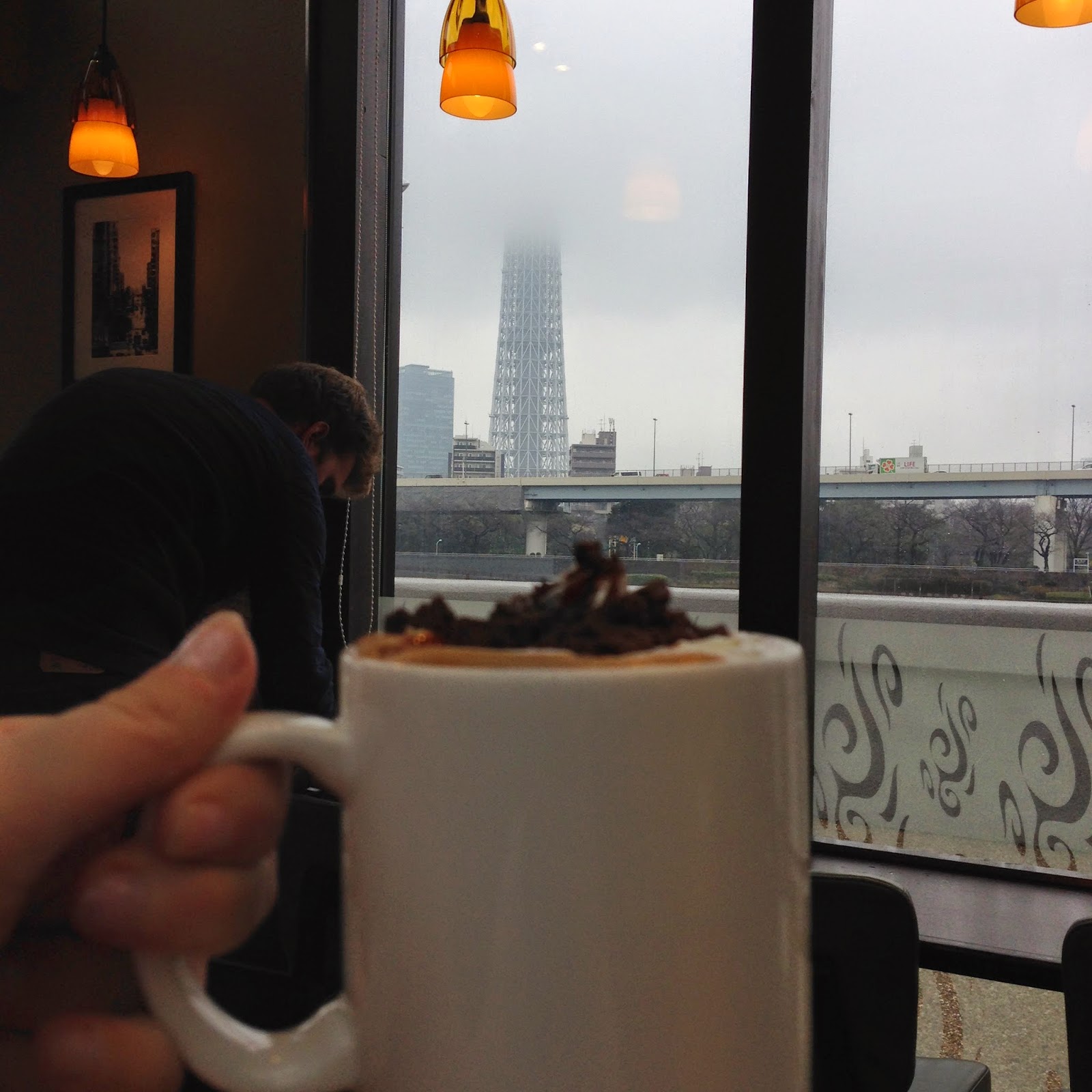 Next we decided to head to Akihabara, which is the entertainment and electronics area of Tokyo. The walk was about 3km, but we decided it would be more fun to wander the back streets then fight through the subway. If you are up for walking then Tokyo is a perfect city for it! Plus if you eat as much as us it's a good idea ;)
We saw the largest temple in Tokyo and popped into the largest electronics store in the world. We also saw the AKB48 cafe, and then we finally headed back to Shibuya for the next part of our romantic date. Dan had managed to get us into one of the Alice in Wonderland themed restaurants!! It was so fantastic and magical We literally walked through a story book page to enter the restaurant and were given cute ears to don for the meal!! It was so thoughtful and sweet. Definitely more for me than him, but the food and drinks were tasty! If you want a fun experience I definitely recomend it! You will feel like you are somewhere totally different, and the atmosphere is relaxing and fun.

In the days that followed we had the chance to experience more of Tokyo, enjoying coffee shops, fun restaurants, cheap happy hours and laughs with old friends. We even had the chance to meet up with a friend from University who is a head hunter in Tokyo now, that was a blast! Tokyo is such a fun city, but so overwhelming. It is nice to be back in the simple familiarity of Tottori!
Posted by Kia at 03:23